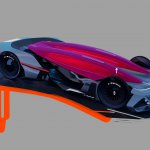 As part of its 90th anniversary, Pininfarina staged a contest, “New Dreams for a New World,” inviting entries from architecture, design and art school students to submit their ideas for setting a new normal when it comes to smart transportation and spaces.

Nearly 150 entries from students representing 25 nations were received. Pininfarina announces the winners as:

Smart Individual Mobility (a new way to move that is easier, more efficient, cost-effective, environmentally friendly, safe and comfortable for the individual) — Yonghoon Lee of the Hochschule München, Germany.

Lee’s creation is Vision Zero, which Pininfarina notes “starts from the consideration that natural phenomena such as photosynthesis or convection can be used to make cars an environmentally friendly resting place in the city.

Lee adds, “I want the vehicle to appear to the people in the city as an environmentally friendly resting place like nature. I found a shape on traditional roof that made air flow easier. And this form can efficiently manage the temperature in a vehicle. Air ducts on the front and back of the roof keep the ideal temperature even without air conditioning. Thanks to the artificial photosynthetic structure on the roof, the owner can enjoy fresh oxygen-containing air in the city center at all times. Therefore, the front and back have created a straight feel and shape.”

Smart Social Mobility (new forms of collective mobility that promote the concept of sharing and a sustainable lifestyle) —  Tom Moreau of Strate School of Design, France.

Pininfarina says Moreau’s design, Bench, is intended to reduce the number of vehicles by sharing them.

“The interest is to offer several modes of travel to customers according to their desires,” Moreau said, adding that his project uses  “acoustic levitation,” which allows objects to levitate by using the pressure of radiation from sound waves that are intense but out of the range of human hearing.

“The customer can thus have a completely autonomous vehicle or a manual driving to make the most of his journey. Once the vehicle is no longer in use, it turns into street furniture and thus becomes an integral part of the city.”

Smart Spaces (a new way to live together) — Riccardo Grecu of the Politecnico di Torino, Italy.

“Dinamico,” Pininfarina reports, “is a pavilion whose design draws inspiration from the principle of simplicity, although still being characterized by a strong visual identity.”

Adds Grecu, “The shape originates from a flat surface which, once bent, creates an enfolding and protective space. The pavilion is flexible and transformable: the user can configure and customize it according to the need and the occasion: it can be a fair pavilion, study hall, co-working office, meeting point, bike sharing station, charge hub for electric vehicles. Thanks to foldable furniture and a home automation system, the user is actively involved in the customization and reconfiguration of the space, moving, hiding and choosing the most suitable furniture.”

Such a structure would be built from eco-friendly material using  building techniques aiming to reduce the environmental impact.

“The designers produced very high-quality material making the task of the jury panel very difficult, and we saw a consistent expression of what the New World should be in the eyes of the designers of the future,” said Kevin Rice, Pininfarina’s chief creative officer and one of the contest judges.

Each of the category winners receives a 6-month internship at Pininfarina’s design studio.

In addition to the category winners, two special awards were presented. The Chairman Award went to Nathan Groot of ISD Rubika (France) for Valentina, a vehicle designed around two individuals but with each in a separated comfort zone, and the DesignWanted special award went to Junu Kim of Coventry University (England) for Pavilion-The Ego Gallery, a pavilion inspired by one built annually in Kensington Garden in London.

Gemballa supercar to enter production in 2024

flutter
German tuner Gemballa has been in the business of making fast cars faster since 1981. Now the company, based...
Read more

flutter
Monument Valley Navajo Tribal Park is a magical place. Despite being only about a five-hour drive from my...
Read more

Need A Nudge to Achieve Your Automotive Dreams?

flutter
Are you like me and you are an automotive enthusiast, yet you cannot draw if your life depended...
Read more

flutter
My heart is in classics, but what determines a classic? Maybe I should state I start to lose...
Read more