Homepage
Blog
Pick of the Day: Before sports cars, Jensen was a coachbuilder

Pick of the Day: Before sports cars, Jensen was a coachbuilder 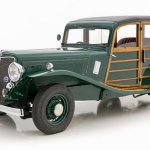 Long before Jensen would be known for producing post-war sports cars, brothers Richard and Alan Jensen were British coachbuilders. Starting in 1936, they did bodies on Austin Sevens and would add coachwork on Standard chassis as well.

After uniting with W.J. Smith & Son, they expanded to work on more stylish bodies on Wolseley, Morris and Ford chassis.

“As the 1930s progressed, Jensen discovered their niche when they imported a batch of 20 Ford V8 chassis from North America and created a series of stylish touring cars,” notes the St. Louis, Missouri, dealer advertising the Pick of the Day on ClassicCars.com. It’s a 1935 Jensen Custom.

“This exceptionally rare Jensen-Ford Shooting Brake is the sole surviving example of an estimated two or three built in 1935,” the dealer notes. “Based on a Canadian Ford Model 48 V8 chassis, it is one of the 20-odd Fords imported and bodied by Jensen in the 30s.

“However, Jensen did much more than simply tack a new body onto the existing frame — to achieve their desired look and lower center of gravity, they repositioned the engine and lowered/raked the radiator, resulting in a dramatic and sporty appearance.”

The dealer reports that previous owners of the car believe it was built for a doctor, who used it sparingly.

“Records show it was briefly taxed and registered in the UK in 1957 & 1958, though it disappeared from the road soon after,” the dealer says. “In the early 1980s, the car resurfaced via a Jensen Owner’s Club UK newsletter article, describing a wood-bodied Jensen in a complete but rather sorry state, lurking in a garage in Dorking, Surrey.

“With the threat of the car being sent to the breaker’s yard, the author issued a plea to save it. Help arrived when the owner contacted a fellow Jensen Club member for a valuation. When he saw the car sitting in the junkyard, he immediately decided to buy it and bring it home for restoration.

“A piano restorer by trade, the new owner painstakingly refurbished the ash framework, taking great strides to preserve as much of the original wood as possible. In the early 1990s, after years of effort, the Jensen shooting brake returned to the road. By 2001, another club member acquired it and continued detailing the restoration and showing the car regularly for club events and concours.

“The most recent owners bought it in 2010, bringing it to the USA, where it joined their collection of rare and desirable Jensen cars and continued to be driven and enjoyed in shows and concours events.

“Today, this unique and stylish Jensen is offered in excellent condition; its restoration gently matured after years of meticulous, enthusiastic care. The rich green paint is a fine match for the ash-framed body and red leather-trimmed interior, and the lowered, steeply raked radiator gives the Jensen-Ford a decidedly sporty character.

“The paintwork is glossy and attractive, with a few minor imperfections consistent with the restoration’s age. Brightwork is in good condition all around, and fittings include period correct Lucas head and marker lamps, a single oval Notek fog lamp, radiator stone guard, and rear-mounted spare wheel with a color-keyed cover.

“The interior is trimmed in dark red leather with matching wool carpet, which has taken on a pleasing character with age and use. Controls and switchgear are original fitments, and the dash has knobs and a pressure gauge for the Andre “Hydro-Telecontrol” adjustable suspension. There’s also a lovely Smiths clock and Cooper-Stewart main dials.”

Ford’s flathead V8 provides power, this one a Canadian-produced unit, “runs well, delivering a respectable amount of grunt to move the Jensen along with ease,” the dealer reports.

“Thanks to the robust Ford underpinnings, the Jensen-Ford is reliable and easy to live with, boasting excellent parts and service support from just about anywhere in the world.

“Early Jensen cars are a rare sight on our roads, and this charming Shooting Brake has the added cachet of being the only known example,” the dealer says. “It has an interesting and well-documented history, accompanied by a large file of receipts, correspondence, MOT certificates, V5C documents, and insight from marque historians.”

The vehicle was done in 1935 and in 1936 Jensen evolved from coachbuilder to automobile manufacturer, producing what the dealer reports as “the combination of British style and American V8 power that defined Jensen Motors from its inception until production ceased in the late 1970s.”

The Jensen Custom is offered for $119,500. To view this listing on ClassicCars.com, see Pick of the Day.

Gemballa supercar to enter production in 2024

flutter
German tuner Gemballa has been in the business of making fast cars faster since 1981. Now the company, based...
Read more

flutter
Monument Valley Navajo Tribal Park is a magical place. Despite being only about a five-hour drive from my...
Read more

flutter
My heart is in classics, but what determines a classic? Maybe I should state I start to lose...
Read more

Need A Nudge to Achieve Your Automotive Dreams?

flutter
Are you like me and you are an automotive enthusiast, yet you cannot draw if your life depended...
Read more